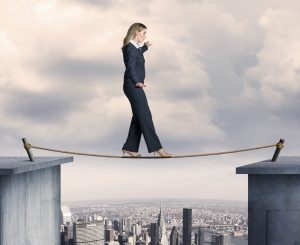 Earlier this spring, NASA’s Armstrong Flight Research Center (AFRC) signed a license allowing Vigilant Aerospace Systems to integrate its patent-pending sense-and-avoid system into the startup company’s FlightHorizon™ avionics platform. This deal is noteworthy not only because it may improve flight safety for all kinds of aircraft, including UAVs/drones, but also because it provides a valuable tech transfer case study.

Having been partnered with the technology transfer office (TTO) at NASA AFRC for many years, Fuentek has supported the commercialization efforts for this aviation control/tracking technology from the beginning. As such, we know how this case illustrates that effective tech transfer often requires balancing assertiveness with patience.

The trick is knowing how assertive to be (i.e., how much time and effort to put into an opportunity) and how patient to be (i.e., don’t give up too early).

Setting the Strategy for Marketing

In evaluating this technology, we found it was clearly fit for commercialization, but our ramp-up to marketing revealed that the technology seemed to be ahead of the market. Industry experts appreciated the innovation, but our efforts to engage them as prospects for licensing didn’t get much traction.

It was clear the market was coming, but at this early stage the landscape and value chain players were too unclear to warrant an aggressive marketing campaign. So instead we recommended a passive campaign, posting an online technology listing on the TTO’s website. Because it was unclear how the market would unfold, we were cautious, advising that it didn’t make sense to spend an overabundance of resources at this early stage.

While we didn’t recommend an active marketing campaign at this time, we did keep our eyes open for opportunities to get the word out about the technology. So we nominated the invention for the Outstanding Technology Development Award issued by the Far West Region of the Federal Laboratory Consortium for Technology Transfer (FLC). This choice was deliberate—the nomination form was straightforward and easy to complete given the marketing materials we already had. Other awards with complex forms would have required too great an investment of time relative to the expected return.

This strategy, which resulted in a win, paid off in a significant way. You see, that year the Far West and Mid-Continent FLCs combined their yearly meetings with the WBT Open Innovation Forum, which attracted technology-scouting companies and investors. The inventor, who attended to receive his award, collected business cards from folks interested in his award-winning technology. One of those cards was from Cimarron Capital Partners, the venture capital firm that eventually backed Vigilant Aerospace Systems. During our post-meeting follow up, Cimarron invited the inventor to present his technology at another WBT event, which included an audience of entrepreneurs and investors interested in technologies related to unmanned aerial systems.

Inventors can be great advocates in tech transfer. And in this case, the inventor’s enthusiasm was crucial. He not only continued advancing the technology but also was proactive in making connections, such as those at the FLC meeting that led to the presentation to Cimarron.

As we collaborated with him on his presentation for the investors, the pitch took on just the right tone. It had the right level of detail for an audience of investors, and it focused on the value proposition and other information that they would consider most important. Plus the practice sessions prepared the inventor for the questions that might come up, helping him avoid crossing the line of revealing too much information or making promises that could not be met. Of course, we’d secured non-disclosure agreements (NDAs) during the meeting preparations, but still it was important to protect AFRC’s position as negotiations began.

Following best practices when it comes to licensing negotiations helped the TTO secure a win-win agreement between NASA AFRC and Cimarron-backed Vigilant based on a multitude of factors. Of course, I can’t reveal the details here, but suffice to say that the process again combined the principles of assertiveness and patience. From analyzing the proposed royalty rate against similar deals to conducting due diligence in examining the pro forma, the TTO was able to be thorough without seeming arduous. Carefully thinking through their responses to Vigilant’s proposals and requests helped the TTO ensure that they secured a fair deal while also making sure that NASA technology could be used to help a small company get off the ground, benefit the economy, and make the technology widely available.

It was a pleasure to collaborate with the TTO in this final phase of the process. Helping ensure our client got a fair deal and supporting them throughout the negotiations is only part of what we do at Fuentek, but quite frankly it’s one of the most satisfying parts. This is particularly true when we’ve been able to accompany them along the entire road to technology transfer.

For information on how Fuentek can help you manage your organization’s intellectual property (IP), contact us today.