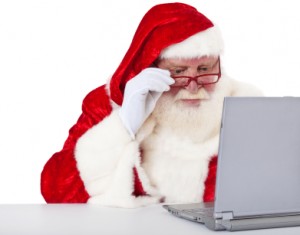 I know lots of people are talking about the fiscal cliff. (Heck, I’ve been talking about it myself.) But as we head into this last month before we hit it (or not), my frustration is reaching a pinnacle. So brace yourself for a rant, albeit with a holiday spin.

All I want for Christmas is for members of Congress to figure out how to work together and compromise. The sad thing is, this has been a Christmas wish for the past, oh, 15 years. (Santa? Santa, are you there?)

Congress has not passed a budget in a timely manner since 1997. In fact, the last budget they passed at all was in April 2009. Worse than a bad teenager who had put off writing a paper until the night before it was due, legislators would not pass a budget until December at best — yes, that’s several months into the fiscal year.

Unfortunately, those are now considered the good old days. That’s because back then, even though the budget was late, government agencies and contract/grant recipients knew what to expect. But in the past several years — as the continuing resolutions have continued… and continued — things have gotten really bad. Now, there is constant uncertainty about how much funding there will be and when it will be available.

The negative impact of this uncertainty is significant and expensive, both now and in the long term.

1. It wastes taxpayer dollars. When government agencies get their money in dribs and drabs, they allocate it the same way. But this is a far more expensive way for the government to do business. Here’s just one aspect: Every time the government cuts a purchase order (PO), it incurs an associated fixed cost — let’s assume it’s $10,000 — to cover the work of the purchasing department. When the government operates under a continuing resolution, rather than issue a single yearly PO for, say, $200K (where the purchasing setup cost represents 5% of that total), the money goes out over time in several smaller POs, let’s say 4. This brings the purchasing setup cost to $40K, or 20%. So this means the government would have to spend $240K over 4 POs to get the same productivity of a single $200K PO. However, the reality is that now the government contracts only for whatever they can get for $160K because they don’t have the $240K to spend on the original plan.

2. It hinders research that creates jobs and saves lives. It’s been discussed not only in the tech transfer industry but also in such popular media as The New York Times, CNN, and Discovery News. When the government underfunds basic research (see point #1 above), the pipeline for technologies that lead to new/improved products dries up. Yes, this is the pipeline that essentially created the U.S. biotech industry as we know it today, not to mention scores of other industries’ products that have contributed billions to GDP and created millions of jobs over 15 years.

3. It is unproductive. The amount of time being spent by the federal government figuring out their “What if the fiscal cliff happens?!” contingency plan is mind-numbing. I suppose if we do, indeed, go over the cliff, then the good news is (Santa, cover your ears!) they’ll get to put those plans into action and it won’t have been a complete waste of time. But I think everyone would agree that is a silver lining that is, in fact, made out of mercury. And BTW all this wasted time on contingency planning isn’t just for the fiscal cliff; it goes on all year long for continuing resolution budget planning too.

So Santa, please explain this to members of Congress for me. They say they want to create jobs. They say they want government to be efficient and effective. But their behavior is doing the exact opposite. Either they are so caught up in trying to destroy each other that they don’t notice the collateral damage they’re causing, or they are so naïve from a business perspective they don’t even realize that it would have this type of impact. Neither is an appealing or acceptable excuse.

What’s your letter to Santa ask for?