By Laura Schoppe
Laura Schoppe is the founder and president of Fuentek, LLC. She served as 2011-2013 VP of Strategic Alliances for the Association of University Technology Managers (AUTM) and was the chair of AUTM's Global Technology Portal Committee.
Just as I expected, the games of the NC Regional FIRST Robotics competition this past Friday and Saturday were fun and exciting! I was lucky enough to be a judge again this year, meeting new kids and seeing many of last year’s teams come back.

There were 17 new teams this year, all from NC. This was a great indicator that the efforts to get more kids interested in science, technology, engineering, and math (STEM) through playing a robotics game are working.

Not only were there a lot of rookies this year, but they did really well their first time out! Team PyroTech came in 7th overall and was selected as part of one of the final 8 teams for the championship game. They also won the Rookie All-Star award, giving them an automatic ticket to the National Championship in St. Louis at the end of April.

And they weren’t the only rookies in the finals. Retro Robot (Team 3493) and Yeti (Team 3506 with the very cool hats!) were both chosen. Yeti was part of the winning team, so they’re going to Nationals too, plus they won the Rookie Inspiration award.

We gave another award to a rookie team, the Elemental Dragons (Team 3680), for persevering with enthusiasm and grace after their robotic arm broke. What a comeback! 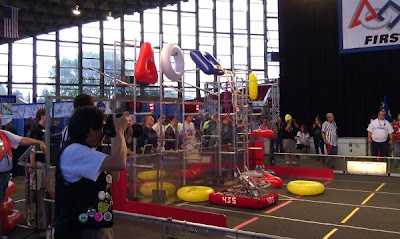 I’m not supposed to have favorites, but I have to admit that I was glad to see last year’s Rookie All-Star winner—Team Spork—back and just as enthusiastic. This infectiously energetic team had about 30 students, half of them girls. As we judges walked around the pit, we’d often see a Spork in another team’s stall helping out. During the games and awards, we’d see their red-lit safety glasses in the stands with a lot of cheers coming from their section. This embodiment of Gracious Professionalism™ was true for many of the FIRST teams, but it was even more gratifying to see these attributes in such a new team.

I hope to see all of this year’s rookies back next year. And I hope Yeti brings an extra hat for me!

–By Laura A. Schoppe