By Laura Schoppe
Laura Schoppe is the founder and president of Fuentek, LLC. She served as 2011-2013 VP of Strategic Alliances for the Association of University Technology Managers (AUTM) and was the chair of AUTM's Global Technology Portal Committee.
College sports fans in the Triangle could learn a lot about healthy competition from the kids we saw at the North Carolina FIRST Robotics Competition. Embodying the concept of Gracious Professionalism™, these students helped each other despite being in a competitive event. It was fabulous to watch.

I’ve been thinking about this after participating in a roundtable discussion with members of the President’s Council on Jobs and Competitiveness and in thinking back on a conversation I had over coffee with a local entrepreneur.

Jason (who went to NC State) and I (who went to UNC’s business school) were trading stories about ridiculous rivalries we had experienced when he quipped that he thinks the lack of cross-university cooperation is the fault of basketball. I had always found the divisions weird, but it had never occurred to me that they stemmed from sports. I had always equated school pride with academics, but that was because I did my undergrad at a really geeky school with bad teams. (To get students to come to a football game, they gave away free computer disks!) 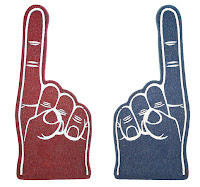 But of course, Jason was right. Sports rivalries are why people who never even went to college in this area hate a specific shade of blue. They’re why kindergarteners talk about how one school is the best and the others are losers. They’re why, when doing the seating for a cancer charity dinner, we needed to know people’s loyalties so we didn’t seat a State fan with a UNC doctor. Even President Obama referred to ACC rivalries when he spoke at Cree on Monday.

Sports rivalries have a pervasive impact on the Triangle, and it’s impeding entrepreneurship. Scientists from one school need to work collaboratively with engineers from another to tackle the multidisciplinary problems of green energy, biotechnology, smart materials, etc. But if they don’t do that because of the color of their shirts on Saturdays, they are cutting off their nose to spite their face.

What they need is “coopertition,” a term the FIRST kids used freely in talking about the robotics competition. If all of these organizations collaborated to create a consolidated, comprehensive program, I believe the benefits for the region would be significant. Specifically:

To be fair, this is already starting to happen. For example, N.C. State and UNC have formed a Joint Department of Biomedical Engineering, and there’s the recent formation of the Blackstone Entrepreneurs Network, which brings together the Triangle’s three major universities. As an external organization that is not part of the university fiefdoms, Blackstone is in an ideal position to foster cross-university collaboration. (I’ve already suggested to the Blackstone Foundation fund recipients that they undertake the matrix exercise I discussed above.)

There is much work to do. Cross-institution collaboration is not the norm in the Triangle. And cultural patterns are hard to break. But I believe it can happen.

To invoke Ronald Regan: Tear down these walls, Mr. Blackstone!

Entrepreneurial Ecosystems
Recent Posts
Government Use of IP: Webinar Offering of AUTM 2020 Panel
Calling All Universities: Promotion and Tenure Coalition Forming
Looking Forward to #AUTM2020 in San Diego
How to Get the Most Out of the AUTM Annual Meeting