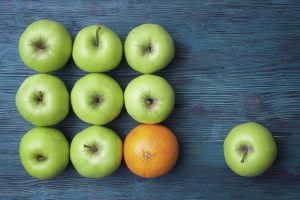 Last month there was a series of posts on the AUTM members discussion group on the topic of metrics. Metrics is a topic that Fuentek has thought about before. And we’ve recently completed several organizational analysis projects with a heavy metrics component. So I wanted to chime in with some context and best practices. Then I offer some specific recommendations for TTO metrics.

Metrics Run the Length of the Tech Transfer Pipeline

As Fuentek’s Becky Stoughton discussed in her series on metrics for new TTOs, effective metrics look at more than just the end-goals of deals signed and revenue generated. The early stages of the tech transfer pipeline must be robust in order to have success later. The early-stage metrics related to researcher participation and case processing are a bellwether of what is possible as far as deals.

Any meaningful comparison of TTO performance — whether over time or relative to other TTOs — requires normalization. Some of the normalizing relates to changes that are external to the TTO yet affect your inputs, such as the institution’s amount of R&D revenue. And some of it controls for differences in internal factors, such as labor resources.

Factors to normalize include:

When Comparing to Others, Choose Your Peers Carefully

An important consideration in cross-institution benchmarking is: Who are your peers? In evaluating TTO performance for several clients recently, we chose the peer institutions carefully, considering such factors as:

Of course, that’s just the tip of the iceberg. There is more to say about normalizing metrics than can be covered in this blog post. So check out our white paper: How’d We Do: Establishing Useful Technology Transfer Metrics.

Let’s start by looking at the direct metrics and assume the following three goals:

Below are our recommended direct metrics tied to each of these goals.

For these metrics, higher numbers are better:

For these metrics, lower numbers are better:

For these metrics, higher numbers are better:

The last bullet is more of an interim metric — it’s not the endgame but it’s an important indicator of future success. Other such metrics include the number of interactions with prospects and the number of NDAs and MTAs executed. (NDA = non-disclosure agreement • MTA = material transfer agreement).

The recommended direct metrics listed above are important. Yet as I discussed here, there are also important indirect metrics that indicate whether your TTO is on track for ongoing success. I’m talking about metrics related to securing R&D funding and top-notch faculty. It’s not just that TTOs have influence over these indirect metrics (which they do). It’s that these metrics affect the quantity and quality of technologies that feed the tech transfer pipeline. Plus these metrics have a significant effect on economic development (more so than startups), which TTOs are increasingly held responsible for. But we’ll save the detailed discussion of all this for a later blog post.

These metrics insights give you a peek at how Fuentek helps clients understand and improve their organization’s performance. Looking at the numbers — while normalizing to ensure consistent, appropriate comparisons — allows us to identify areas of strength and concern. Then we develop strategies to address the areas of concern. We can even help implement the strategies. So contact us today to find out how Fuentek can help your TTO be more proactive, efficient, and effective.