By Laura Schoppe
Laura Schoppe is the founder and president of Fuentek, LLC. She served as 2011-2013 VP of Strategic Alliances for the Association of University Technology Managers (AUTM) and was the chair of AUTM's Global Technology Portal Committee.
Ask anyone who works in intellectual property management and they’ll tell you: Patents ain’t cheap. (Well, some would use better grammar, but the sentiment is the same.) We’re talking $20K for a U.S. filing alone, and that doesn’t include the ongoing maintenance fees. So if you’re going to file for a patent, you want to be sure you’re going to get your money’s worth.

Fuentek was curious as to how technology transfer offices (TTOs) made their patenting decisions, so we took an informal poll. The question was:

When making the patenting decision, which of the following is the most important factor to consider: patentability (prior art, stat bar issues, etc.), technical viability, or market factors? 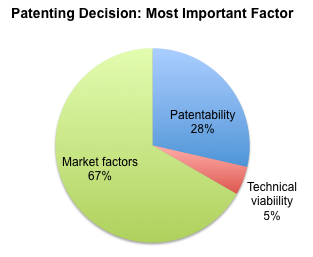 As you can see by the pie chart, the vast majority chose market factors. This is good news! It means that most tech transfer professionals are evaluating their technologies and recognize that just because an invention works or can be patented, doesn’t mean it should be patented. If there is no market for the technology, there is little point in spending time and resources determining whether it is technically viable, what prior art exists, or whether a stat bar deadline has been passed.

So the trend is in the right direction. But I have heard about patent applications being filed due to right-to-practice concerns. Some people worry that, even if the technology has no market potential, they need to obtain a patent in order to protect their right to use the innovation themselves. It’s an “If we don’t patent it, someone else will and we won’t be able to use our own invention” mentality.

For a government lab or research organization (not a company), this is totally erroneous. Put simply, filing a patent solely for the purpose of protecting your right to practice is a waste of money, because there is a perfectly legal and inexpensive way to protect your rights…

When you put the technology into the public domain, no one can patent it and thereby preclude you from using it. Non-U.S. patenting is precluded due to other countries’ first-to-file rules. And within the U.S., you can easily and inexpensively demonstrate that you were the first to invent by citing the publication if not your notebooks.

Keep in mind that publishing the technology does not have to be expensive. Nor does it require publishing a refereed paper. It can simply be announced on the tech transfer Web site—just print and date stamp a hard copy and put it in a filing cabinet.

One trap that universities and government labs are particularly susceptible to is prestige patents. These occur when policies create incentives for having as many patents as possible, regardless of their commercial viability. Many institutions have “refereed papers or patents” as a metric. Yet sometimes the patent is easier to obtain than the refereed paper. But that means you’re patenting something that has neither market value nor scientific value. So why would you spend $20K on that?!

Solutions to this problem include:

As for corporate TTOs, this tends to be less of an issue, given their focus on the bottom line. But, believe me, there have been (and perhaps still are) companies with policies that incentivize the costly behavior of patenting everything.

The number of patents should not be the metric. The metric should be: how many patents made their money back through licensing or product development. (Want to know more about metrics? Read our paper “How’d We Do: Establishing Useful Technology Transfer Metrics.”)

So just in case my position on this is confusing, let me be crystal clear: The only reason you should even consider patenting an innovation is because it has market interest. The best way to figure that out? Perform a technology screening.

Wanna take another poll? Our new one is live! And it’s a two-part question: Does your TTO have economic development (ED) goals, and does your TTO collaborate with external ED agencies?

– By Laura A. Schoppe