By Danielle McCulloch
Danielle McCulloch formerly served as a Fuentek vice president. She transitioned to our client and is now Deputy Program Manager for NASA’s Flight Opportunities program.
Researchers at NASA’s Glenn Research Center have developed a patent-pending method for fabricating aerogel composites for thermal insulation applications — and NASA is now making this technology available for licensing. 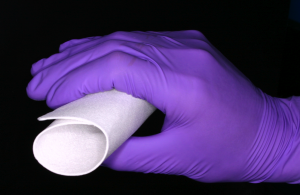 These low-density composites are super flexible (check out the photo!) and robust enough to withstand temperatures of up to 1,200 °C without flaking. These qualities — plus its lower weight and higher efficiency — make the innovation an ideal insulation material for the aerospace, military, aviation, and oil and gas industry applications such as:

In fact, several commercial companies have already expressed interest in the technologies, and we’re helping with moving them down the technology transfer pipeline.

NASA’s award-winning engineer Frances Hurwitz developed the technology in collaboration with Ohio Aerospace Institute (OAI). In fact, the two organizations have a joint-ownership agreement (JOA) in place for the intellectual property (IP). The JOA specifies the roles and responsibilities for patent prosecution and technology marketing, and it authorizes NASA Glenn to represent OAI during license negotiations.

Quite frankly, this agreement is a big win for potential licensees:

I think OAI’s Ann Heyward said it best: “This agreement is a proactive, rather than reactive, approach to commercialization. Not only does it empower NASA to negotiate on OAI’s behalf, which is more resource efficient, but we’ve worked out in advance all of the issues that typically come up during licensing. This head-start will be a significant benefit for companies interested in our joint innovation, and it’s an approach we want to build on for the future.”

If you’d like to learn more about how Fuentek can help you employ these types of proactive strategies in your technology transfer activities — or if you’re interested in learning more about licensing the aerogel-reinforced composites — contact me here.  You can also read more about the successful joint-ownership agreement between NASA Glenn and OAI.