Editor’s note: Helping clients successfully establish SRAs, technology licenses, and other agreements is part of what we do here at Fuentek. You can see more about our deal-making services, read more of our insights, or contact us to discuss how Fuentek can help your office negotiate win-win agreements.

My recent experience with a Sponsored Research Agreement (SRA) has underscored the potential miscommunication that often keeps universities and corporations from peacefully coming to successful negotiations. So, I’d like to take some time to weed through what each party can (and cannot do) and why, in an effort to clear up some misconceptions and potential frustrations.

Sponsoring research at universities is a great way for companies to secure IP targeted to their industry—but of course they want some assurances on ownership of the IP that results from the funded research. SRAs usually include a first right of refusal provision—if the company wants the IP they negotiate for it, and if they say they don’t want it, the university can license it to anyone. Often, however, companies worry that they will be overcharged for the technology—especially if the university knows that it is valuable to them. If it was one business hiring another to do the work, they would either prenegotiate the license fees, or they would own it as a work for hire. But universities cannot prenegotiate with research sponsors—to do so would jeopardize their tax-exempt status.

In reality, universities typically are not trying to overcharge companies sponsoring their research (they want a long-term relationship with them and more sponsored research) and are happy to license at typical rates. Whether “typical rates” are acceptable to the company or not is a different matter. IRS rules require the university to license the IP to the company for the same amount they would to anyone. According to the IRS Operating Guidelines for Research Agreements:

While the IRS clearly restricts universities from giving research sponsors pre-negotiated, favorable licensing rates, there are some measures that can help companies feel that they have minimized their risk. 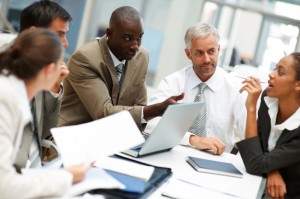 First and foremost, it is imperative that TTOs explain the IRS rules to their corporate sponsors up-front. If the company doesn’t understand these restrictions, my direct experience tells me that they will find the TTO unreasonable and greedy when they ask for favorable terms. This results in both sides being unnecessarily frustrated.

Second, consider a letter of intent to accompany the SRA that would restate the first right of refusal provision (this does not violate the IRS rules). The letter can also explain what traditional/typical parameters for a license have been in the past (up-front fee, annual royalty, etc.) and that it is expected that this license would fall within that historic range. Though this is not a guarantee or pre-negotiation (as mentioned, they cannot prenegotiate), it is an acknowledgement (gentlemen’s agreement) by the TTO that they expect to give a license within that range. This is hopefully sufficient to give the company a sense of the bounds on what they will pay in the future. The complaint I have heard from companies seeking SRAs with universities was that they want to know what their level of exposure and risk will be—not that they were looking for a bargain. So, I think this strategy may go a long way in helping bring both parties to the table.

What this really comes down to is trust and communication. Are you on the same page regarding your work together? Are your goals compatible? Are you in agreement about what you’re trying to accomplish? Figure these things out first, before you start to get into the legalese of the agreement. That way you have the full support of both organizations, which should help ease any legal issues later on. Fuentek advocates for a 2-step licensing process that can help you avoid many of these pitfalls from the get-go, and that same approach can be applied to other agreements.

Do you have experience with SRAs or lessons learned? Contact us to give us your thoughts.