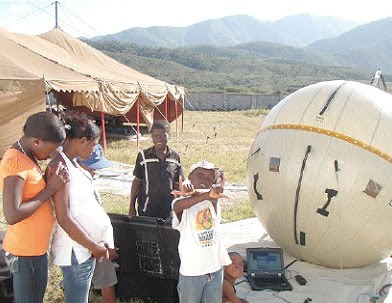 The award-winning inflatable antenna was deployed to assist with communications efforts following the January 2010 earthquake in Haiti. (Image courtesy of GATR Technologies)

A technology with roots in an ongoing technology transfer relationship with NASA’s Glenn Research Center is a recipient of an R&D 100 Award!

The inflatable antenna from the GATR Technologies® company provides emergency Internet access, cell coverage, and phone lines over satellite networks—all in a compact package that can be transported in two suitcases and set up in less than an hour.

The technology’s low weight and quick deployment make it ideal for use in first-responder emergency situations. Early prototypes of the ground-based antenna were used by GATR to assist with communications needs following Hurricane Katrina, and the technology also assisted FEMA’s efforts during Hurricane Ike. The inflatable antenna has been used by law enforcement with missing person rescue missions, and it has provided communications support to U.S. military and humanitarian operations in Afghanistan, South Africa, South America, Haiti, and Korea.

Most recently, GATR deployed a system at a United Nations search-and-rescue site in Port-au-Prince, Haiti, in response to the Jan. 12 earthquake, a second antenna at a special operations unit at the Port-au-Prince Airfield, and two systems at a makeshift hospital in the Dominican Republic.

Back at NASA, GATR’s antenna is among other large aperture antennas being considered for NASA’s next-generation Space Communication Architecture.

The R&D 100 Awards are widely recognized as the “Oscars of Innovation,” identifying and celebrating the top high-tech products of the year. Read more about this year’s R&D 100 Awards.

Read the success story about this technology’s origins at Glenn and the technology transfer success.