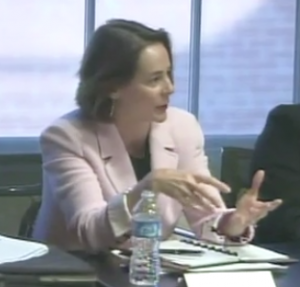 Yesterday I had the great privilege to participate in a roundtable discussion with several members of the President’s Council on Jobs and Competitiveness in Durham’s American Tobacco Historic District. As he kicked off the meeting, Obama’s top economic advisor Austan Goolsbee said that we “will never have a clearer line to the President’s ear than with the members of his Jobs Council that are here today.” Those members included AOL founder Steve Case, Facebook CEO Sheryl Sandberg, Citigroup chairman Richard Parsons, and UBS Americas chairman Robert Wolf.

The topic? Entrepreneurship. Why? As Goolsbee explained, more than 100% of the growth in jobs between 1994 and 2007 was due to new firms (and Fuentek was part of that growth since I established the company in 2001). “It’s always been a driver of U.S. economic growth,” said Gollsbee. So the president wanted to hear ideas from entrepreneurs, “the stories of what you’re doing, what barriers you see… what could the government do and what could the rest of the private sector do to make life easier.”

Talk about an opportunity! And I took it. ☺

I took the opportunity to tell them that innovations from government labs and universities can fuel economic development, but it doesn’t happen in a vacuum. All those inventions need to be evaluated to find the ones of value and help connect them to industry for commercialization. The filtering and vetting of the technologies helps fill the commercialization pipeline for more deals.

But as I said yesterday: The pipeline is not full. Why? Two reasons.

First, the technology transfer offices (TTOs) at government labs and most universities are not well funded. And without adequate funding those office’s can’t do their jobs. (I’ve blogged about this before in the context of the Kauffman Foundation’s proposal to decentralize university TTO functions.)

If that weren’t bad enough, federal TTOs have been at a virtual standstill due to the unresolved budget for FY2011, and that is likely to continue in 2012. The continuing resolution process has had a detrimental impact on the commercialization deal pipeline for government agencies. Not knowing what funding was going to be available when meant that programs never got a start in 2011 or they were substantially scaled back in the waiting pattern. (This was true of many government projects, not just tech transfer.)

As I told the Jobs Council, some great successes have come from NASA tech transfer. Want proof?

But to achieve these successes, tech transfer programs in all government agencies and universities need to be better supported. (And it’s not just funding, BTW.) Providing the necessary resources and support helps ensure the transition of government-funded R&D to company product development and, therefore, jobs.

This brings me to the second needed improvement I mentioned yesterday: standardization of agreements to speed up the negotiations process. I’ve blogged before about how streamlining is a critical aspect of licensing and about ready-to-sign license agreements. And really this is a no-brainer in the sense that everyone agrees 2 years is way too long to negotiate an agreement.

But both sides have to give on this issue. Government labs need to work together to develop standardized agreement terms to make it faster and easier to get to signature. And industry needs to get over the fact that, for universities and government labs, some terms simply cannot be negotiated.

As I said yesterday, “The universities and government labs are not looking to make a tremendous amount of money. Their charter is really to get that technology out, to get it developed, to get economic development. So they have the right mindset. It’s just that the back and forth is taking forever. The lack of standardization is part of it, and the inability to find the right technology is because they don’t know who to connect with. They can’t find the right technology. And that’s where that vetting process is important.”

There were also some excellent points made about the Triangle region’s need to cultivate an entrepreneurial spirit, connectivity of the entrepreneurial community, and the need for universities to work together. But I think I’ve used up my two cents for today. Good thing it’s only Tuesday—more to come!

What do you think about all this? Write a comment below or use our Contact Us page to e-mail me to keep the conversation going.

— By Laura A. Schoppe