Editor’s note: The text of this article originally appeared in AUTM Newbriefs, the weekly e-newsletter of the Association of University Technology Managers®. Members and non-members are invited to subscribe.

Earlier this spring, I participated on an AUTM Annual Meeting panel called “Social Media Unplugged: Is It Worth the Hype?” which explored how technology transfer offices (TTOs) can use social media to better position their organizations and innovations for success. To prepare for this panel, I conducted an online survey of tech transfer professionals. For those using social media in their work, the survey asked which tools they use and whether they find it helps them achieve their goals. For those not using social media, why not? The detailed findings of the survey have been released in a white paper called “The State of Social Media in Tech Transfer: 2013 Survey Results and Recommendations,” which is available via free download here.

Both skeptics wondering whether social media is worth the effort and social media enthusiasts are likely to find the results interesting. Although the brief survey was unscientific, the results provided data on the positive impact of social media as well as valid concerns about the use and role of these tools. An analysis of the responses sheds light on how TTOs can increase the value of social media while avoiding the negative situations cited by some respondents.

A Diverse Pool of Respondents

With just over 100 respondents, the survey results provided a wide range of perspectives. Two-thirds of respondents were from universities, but federal and nonprofit labs, hospitals, and private companies also were represented. Nearly two-thirds had been using social media in their work for more than a year—either individually or through a more formal organizational presence—but nearly one-fourth were non-users.

Users of social media overwhelmingly relied upon LinkedIn® as a key social media tool, and more than two-thirds use social media either for “brand building” or for technology marketing. 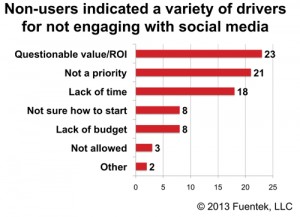 Non-users most frequently cited uncertainty of social media’s value as the reason their TTO does not use social media.

The most interesting findings came in response to the open-ended question: How would you characterize the impact social media has had on your office? Many comments that were favorable about social media’s impact related to its value in helping users gain knowledge/market intelligence, establish/maintain connections or an online a presence for the TTO, and achieve secondary goals (e.g., training, recruiting). At the same time, several concerns were raised about social media, mostly related to the lack of a tangible return on investment (ROI), the amount of time required to implement a social media strategy, and issues surrounding staff usage.

Making the Most of Social Media

To me, the most important comment we received was: “Social media is here to stay in the business world so tech transfer offices might as well utilize it, if not embrace it.” Having said that, one should not ignore the valid concerns raised about social media. Here are a few of the more common sentiments:

Nevertheless, social media offers several benefits to TTOs. More often than not, survey respondents described the positive impact that can be achieved, suggesting that social media is worth the hype:

Although social media alone is unlikely to deliver a deal to a TTO’s doorstep, it can be a powerful tool for building the reputation and presence of the organization. It is just one tool for achieving a TTO’s marketing and communications goals. Like all other tools, it is not used in isolation but in conjunction with other tools and is part of the larger strategy. There are right (and wrong) situations and techniques for using social media tools. But if used strategically and effectively, social media can be a valuable addition to a TTO’s communications and marketing toolbox.

The white paper includes insights about how successes cited by respondents may have been achieved along with specific strategies for mitigating the negative impact of social media so that the positive rewards can be reaped. In preparing and issuing the paper, it is Fuentek’s hope to empower readers to replicate positive outcomes at their own TTO.

If you are interested in learning more about how Fuentek can help your TTO build a high-quality, results-oriented social media presence, send me a message here.