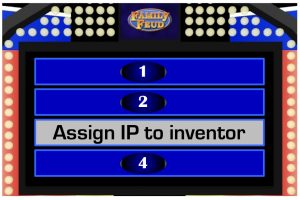 This summer, the technology transfer office (TTO) at Vanderbilt University conducted an informal survey of members of the AUTM® directors online discussion group on TTO policies and practices regarding returning rights to inventors. I found the results from the 84 respondents intriguing, as should advocates for free agency in tech transfer (including sponsors of the current Startup Act legislation). That’s because this survey showed that the essence of free agency — that is, giving innovators the right to pursue commercialization of their technology — is already in place… and the innovators are not pursuing it. Let’s look at the data.

Nearly all — 83 out of 84 respondents — allow for return of rights to inventors in at least some circumstances: 81% permit it while 18% require it. In most of these cases, the TTOs assign (rather than license) the rights to inventors. 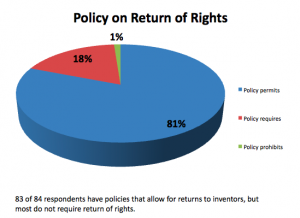 For about half (54%), this process is initiated at the inventors’ request, while 42% offer the rights to the inventors as a matter of routine. If there was more than one inventor, most TTOs (87%) grant the rights to all inventors, regardless of who made the request. It also didn’t matter to most (more than two-thirds) of respondents if an inventor was no longer employed by the university or whether the inventor intended to create a startup company around the technology. 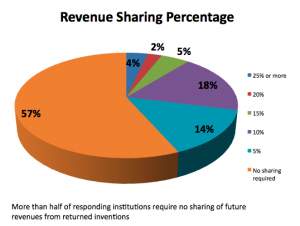 By the way, if you thought that universities tend to soak their entrepreneurial inventors with steep revenue rates, think again. More than half — 57% — require no sharing of future revenues for commercialized inventions returned to the inventors. Furthermore, nearly a third of TTOs don’t require these entrepreneurial inventors to reimburse the university for having patented the technology. And most of those that do have that reimbursement come out of revenues generated by future commercialization — assuming there are any.

The real kick in the pants was this question:

As a percentage of total inventions for which commercialization efforts are discontinued, approximately how often do inventors accept your offer to receive rights to inventions: never, almost never, infrequently (~5-10%), sometimes (~20-25%), about half the time, or the majority of the time? 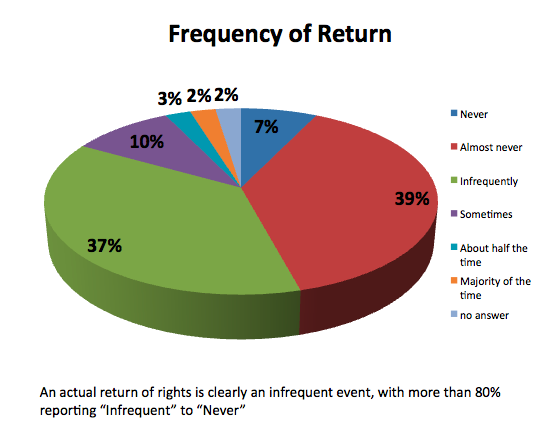 Look at that caption: “An actual return of rights is clearly an infrequent event, with more than 80% reporting ‘infrequent’ to ‘never.'” The implication: The inventors are not interested in pursuing their innovations on their own. So who is really calling for the right to free agency when the essence of free agency is already available to the inventors and they’re not taking it?

Granted, this is not the most scientific of surveys. Still one has to wonder: How will free agency make university professors or researchers any more likely to be entrepreneurial or successful, especially when the provisions in the Startup Act 2.0 legislation muddy the waters regarding authority and responsibility? Have free agency proponents asked faculty if free agency will make them more likely to create a startup? I’d like to see those survey results.

Do the policies at your TTO align with what this survey found? What is your experience with returning rights to inventors? Post a comment below or feel free to contact me privately.

And let’s give a big “Thank you!” to Vanderbilt’s Center for Technology Transfer and Commercialization for conducting this and other surveys of trends in tech transfer. I, for one, really appreciate them and their willingness to let me share this data.