By Laura Schoppe
Laura Schoppe is the founder and president of Fuentek, LLC. She served as 2011-2013 VP of Strategic Alliances for the Association of University Technology Managers (AUTM) and was the chair of AUTM's Global Technology Portal Committee.
Today’s “Worth Reading” post runs the gamut from traditional print journalism to online blogging and to a tweet chat on technology transfer trends. 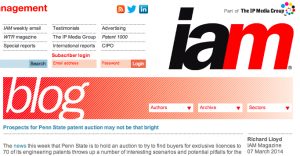 Prospects for Penn State Patent Auction May Not Be That Bright: This commentary on the Intellectual Asset Management (IAM) blog relates to the announcement that Pennsylvania State University will be auctioning off some of its intellectual property (IP) to the highest bidder. The IAM blog post is worth reading because of its insights, which were spot on.

Here are my thoughts about it:

The trick to a successful auction is to create a sense of urgency (buy now or lose it), getting companies interested in bidding rather than asking for a license at their leisure. It will be interesting to see if Penn State gets a strong response and is able to create that sense of urgency. The auction runs through April 11th.

TB Alliance Spins-out Non-TB Assets to TenNor Therapeutics: The TB Alliance is an international non-profit drug development organization that develops better, faster-acting, and affordable tuberculosis (TB) drugs, primarily to serve third-world countries. The TB Alliance has always approached technology commercialization from a unique perspective. They search for and license promising compounds that were underutilized by pharmaceutical companies, investing in development to create new treatments for TB. (Not the traditional licensing scenario where profit potential identifies the winners.)

With this new deal, the TB Alliance has taken another step outside of the box. (Or have they stepped back into it?!) When they recognized that a compound they were testing would not result in a TB treatment, they identified other diseases it could impact so they could seek a licensee to continue its commercialization — in this case to treat infectious diseases of the gastrointestinal tract. The revenue the TB Alliance will gain from this non-mission use of the compound will help fund the future good work they do.

This is an excellent example for all technology transfer offices (TTOs) to consider. You never know what path an innovation may take to the market, so be open minded with your technology evaluations. 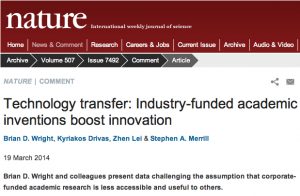 Industry-Funded Academic Inventions Boost Innovation: I was contacted by a reporter at The San Francisco Chronicle about this commentary in Nature about a study released by the University of California (UC) at Berkeley. Examining patents that emerged from industry-funded vs. government-funded research, the study found that corporate-sponsored research results were more likely to be licensed (by the sponsors or, more often, by third parties) than patents generated by federal dollars.

Frankly, this is not at all surprising because corporate sponsors have specific challenges for which a technical solution is needed. I disagree with the authors’ assertion that the findings run “counter to the expectation that corporate sponsored inventions have narrow applications.” They’re not necessarily narrow applications; rather, the research is relevant to a specific need with an identified market. Given that reality, the study’s findings aren’t really counter-intuitive.

Another “unexpected” finding was that the analysis “did not support previous assumptions that licenses to industry-sponsored inventions would likely be exclusive, or that sponsors would snap up the lion’s share of exclusive licenses.” Based on my experience, I wouldn’t expect all licensees to want (to pay for) exclusivity. Startups usually want (and get) such licenses because they perceive exclusivity is crucial for their breaking into the market and acquiring venture capital (VC) funding. For larger corporate sponsors, they are more likely to pursue only one use of the technology and may not need exclusivity in all fields of use. Furthermore, as the authors noted in citing research from the University of Chicago, “corporations turn to universities to investigate areas outside their core strengths, investing in speculative science in the hope of finding profit opportunities.”

It would have been great if this study had expanded beyond nine UC campuses and three national labs. The authors certainly could make use of data from the annual AUTM® Licensing Survey. And if future surveys by AUTM add another layer of specificity to their data collection, such analysis would be very insightful.

#TechTransferTrends Tweet Chat: Our final worth reading is a series of tweets initiated by Marc Sedam of the University of New Hampshire. (Follow Marc’s tweets.) Marc asked:

We offered up the following:

Emory’s were issued in three tweets:

Marc’s response to his own question was:

To conclude, consider the question we posed back and make your comment below or send me a private message: