Worth Reading in IP: Playing Beanball and Patent Stats

By Laura Schoppe
Laura Schoppe is the founder and president of Fuentek, LLC. She served as 2011-2013 VP of Strategic Alliances for the Association of University Technology Managers (AUTM) and was the chair of AUTM's Global Technology Portal Committee.
It’s time again for our monthly Worth Reading post. It’s a short one — just two items — but it’s on a big topic: patents. 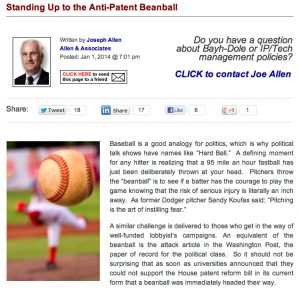 Standing Up to the Anti-Patent Beanball: This post by Joe Allen on IPWatchdog was in response to attacks in The Washington Post and on Techdirt. Joe’s post is definitely worth reading. The original pieces that prompted it both take superficial and out-of-context portrayals of the value of patents and university licensing. Unlike such balanced analyses as the post by Kate Tallman we featured previously, the Post and Techdirt authors ignored the real data and success stories that run counter to their arguments.

Their limited perspectives are not surprising given their experience. Post author Timothy B. Lee has a computer science background, which explains his patents-are-evil viewpoint, given that patents can have negative effects in the fast-paced computer industry. Techdirt’s Mike Masnick does not have any technical experience – frequently editorializing on technology doesn’t count.

It appears their pieces deliberately intended to get a rise out of university TTO advocates in order to perpetuate the “dialogue” of their attacks on the patent system. (Mission accomplished, I suppose.) To avoid sounding defensive in reaction to this type of commentary, continually share your success stories with the public. (Check out the sample success stories we’ve done in our communications work for ideas on preparing these for print, online postings, social media, and multimedia.) Consider working with your organization’s press office or PR firm to move out of the realm of damage control and into a more proactive conversation.

If you are going to the 2014 AUTM® meeting in San Francisco next month, plan to attend one of the following sessions to learn more about advocacy and communication strategies: 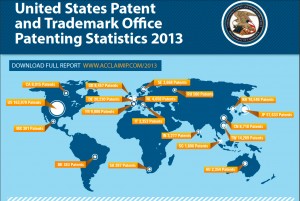 The second item I have to share with you today is an infographic of 2013 patenting statistics from the U.S. Patent and Trademark Office. The image shown here is merely an excerpt from the detailed infographic, which FreePatentsOnline.com published and urged readers to download “and hang it on your office wall.” The full infographic includes lists of the top patentees (companies, inventors, and universities), the 10-year annual patenting trend, and some fun facts about patents that stood out in 2013.

Stay warm, all you readers in the northern hemisphere.