Worth Reading in Tech Transfer: Spring 2016

By Nancy Pekar
Nancy is Fuentek's communications czarina.
Welcome back to another edition of our “Worth Reading” posts for technology transfer offices (TTOs). As longtime readers of our blog know, we keep an eye on the tech transfer industry and occasionally share the insights of Fuentek’s leadership here. One thing you’ll notice is our first three entries are articles from the March 2016 issue of Technology Transfer Tactics. Now in its tenth year, this newsletter has become a useful resource for keeping up with the tech transfer industry. The in-depth stories they put in print provide extremely useful details not found in the weekly email edition.

Bring in Outside CEO at the Right Time, When Founders Are No Longer Enough
Technology Transfer Tactics newsletter • March 2016

This article posits that, although faculty founders bring great enthusiasm to a startup, eventually leadership will (most likely) need to transition to a CEO with the required skill set from the outside. Discussed in detail are the efforts at the University of Colorado in Boulder, which consults with a small group of venture investors to determine if/when outside leadership is needed for its startups. According to the TTO’s Kate Tallman, “You want to engage people from the investment community who have a lot of experience to advise on when a change is needed and when it isn’t.” She also notes that TTOs should help faculty founders understand (by discussing it early and often) that the transition to an outside CEO is not a failure on their part but, in fact, a normal part of startup growth.

From Laura: What CU is doing is great advice. In providing training for innovators, Fuentek has found that it’s important to discuss frankly what it takes to make a startup successful. You need passion, persuasiveness, action-oriented tenacity, and the ability to sell. You also have to be willing to work 80 hours/week, pay yourself last, take calculated risks, and deal with stress and crisis and failure. These characteristics are not usually used to describe most faculty. For this reason, we often hear from investors that they would rather the inventor be a Chief Technology Officer at most and allow others to help identify the CEO and other critical management staff from the start.

To help faculty understand the realities of a startup, here’s a slide we use to outline where a startup can go wrong: 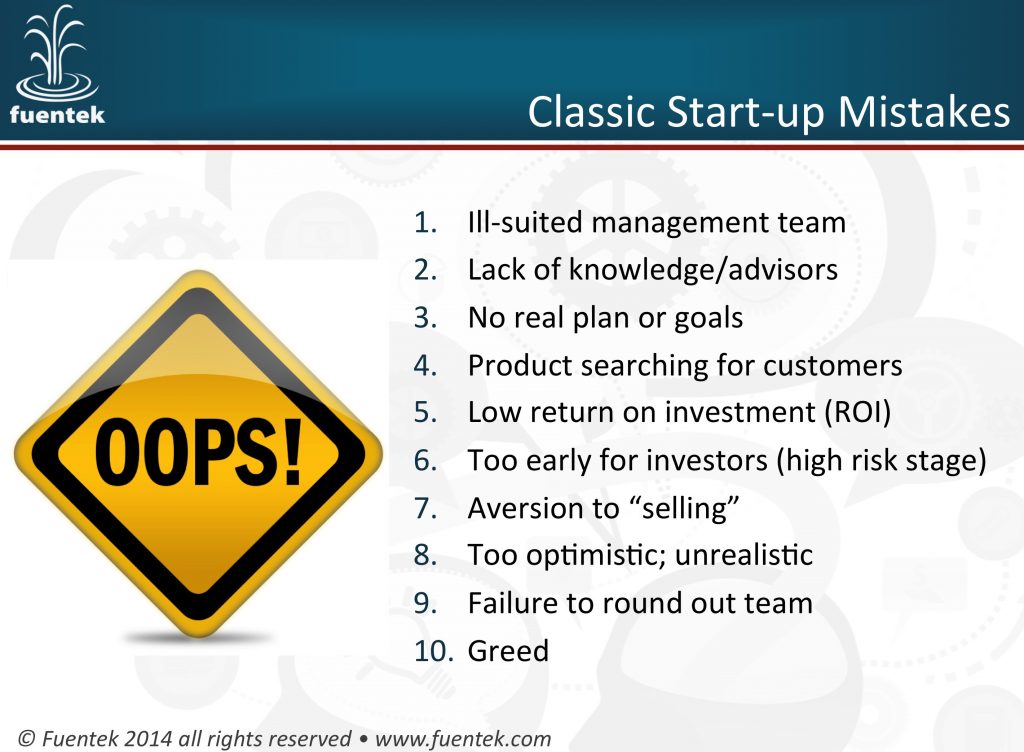 Be upfront with your faculty entrepreneurs — especially first timers — about the reality of startups. Doing so will increase the chances of the startup’s success, which is good for everyone.

The Growing Focus on IP in Sponsored Research

In addition to the MN-IP program’s Option C launched in January, the article also discusses the ~3-year-old NERF option (Non-Exclusive Royalty Free) in Kansas State University’s program for industry sponsored research. These options relate to licensing the IP outcomes of sponsored research. With Minnesota’s Option C, sponsors pay an upfront fee to non-exclusively license the resulting university-owned IP, with no royalties or other ongoing fees. With K-State’s NERF, there is a proposed upfront fee but “we are ready to negotiate… based on what seems reasonable based on industry standards,” said K-State’s Paul Lowe.

From Danielle: Although controversial in the early days, these programs and policies have earned a well-deserved place as an option in the TTO toolbox. They reflect the need for more standardization and less negotiating, getting to deals faster. They also indicate a shifting mindset among universities who strive to be easy to work with and accommodate the needs of industry sponsors while remaining in compliance with IRS revenue procedure on private use in bonded facilities. The smart money is on taking the long view. There often is more to gain from a strong partnership with an industry sponsor than from a license. Provided that each case is considered individually — without applying a blanket policy — these options are useful.

This article begins by discussing the 2013 audit that revealed excessive patenting on a few technologies for which commercialization wasn’t being pursued at the University of Regina in Saskatchewan, Canada. The TTO has since implemented a model for regular review of technologies. The article also discusses efforts at the University of Washington (UW) in Seattle, including a weekly IP meeting and conducting patent landscape searches before converting provisionals. Also, according to the UW’s Jesse Kindra, “[we] have the patent manager and the technology manager working together to figure out if the claims that we can obtain for a particular asset can be licensed.”

From Becky: Having led the reboot of a TTO myself, I know how overwhelming it feels to deal with a legacy portfolio. (And based on our survey of (re)new TTOs, many of you do too.) The examples in this article demonstrate some of the benefits of IP portfolio audits. In addition, evaluating the IP portfolio can further maximize value for the TTO by considering not only patents’ market applications but where they fit into the overall portfolio. For example, Fuentek’s IP portfolio optimization:

Actually, we’ll be doing some free webinars on the topic of IP Portfolio Optimization in the weeks to come. Those will be announced here and via our Fountain newsletter (subscribe).

This post offers seven suggestions for TTO licensing officers while also providing useful insights for potential licensees. Beginning by emphasizing that the choice of licensee is more important than the license terms, Chris Noble explains that — because of the “spikes” (a few isolated blockbuster licenses) and the “long tail” (the majority of deals, which don’t generate tons of revenue) in university tech transfer — one should focus on doing lots of deals with reasonable royalty rates while keeping patenting costs under control. He goes on to offer several due diligence–related suggestions.

From Danielle: What I like about these suggestions is captured nicely in Chris’s conclusion: “They encourage using the licensing process in a collaborative approach to a mutual objective, rather than as a zero-sum negotiation of terms.” We at Fuentek have often worked collaboratively with licensing prospects to develop a win-win agreement for our clients (see examples here and here). In these cases, the carefully developed deal was essential for tech transfer success. In other cases, taking a more streamlined, no-negotiation route to secure many deals is appropriate. It all depends on the technology and the target market(s) identified. But the main point is: Don’t be blinded by greed because, quite frankly, too few of the innovations will be able to “spike” the revenue.

The Value of Patents

This post summarizes the paper The Bright Side of Patents, whose authors asked: Do U.S. patents help startups grow and succeed? In a word: Yes. The authors found significant increases in employment and sales revenue upon approval of a startup’s first patent application. They also found that patents were associated with an increased ability to continue innovating, secure funding, and eventually be publicly traded. Richard Lloyd highlights the authors’ findings on the negative impact of delays and their call for reforming how the U.S. Patent and Trademark Office is funded. He also notes that, “it is not anecdotal and it is not based on survey responses, while there is complete transparency around the data that has been used.”

From Becky: I agree completely that patent protection can be essential to a startup’s success. As tech transfer professionals, we know this is true as well while not inferring that patenting everything is recommended. Willy-nilly patenting is not a strategic use of resources. Instead, startups and TTOs alike should  have two considerations when it comes to patents. First, is the technology fit for commercialization? (Hint: if it’s not, don’t patent it.) Second, keep in mind the timing for key IP deadlines — initial filing, the provisional-to-full conversion, and nationalization (in the case of a PCT filing) — relative to marketing and other commercialization activities, as indicated in the IP “clock” on our Cultivate Your IP infographic. These are best practices that help increase the value of your patents and maximize your patenting resources.

The Role of Education in Economics

This post summarizes the commentary by JHU president Ronald J. Daniels published by Bloomberg View. Daniels outlines the factors that currently strain public universities, including cuts in funding and increases in policy and governance constraints. As a result, private universities have increased aid and access for students as well as focused on contributing to the regional economy through tech transfer and other community-strengthening efforts. But, Daniels notes, “private universities can never fully assume the public role of their state-financed brethren.” He outlines in his commentary three areas for reform.

From Laura: I agree that funding and support of public universities is important; furthermore, he provides data to back it up. In addition to the TIAA Institute study by Daniels, other studies have documented the positive economic impact of technology jobs (such as Vermont’s Tech Employment – The Hidden Driver of Our Economic Growth) and universities’ contribution to the innovation ecosystem and the economy (such as the National Science Board’s Higher Education as a Public and Private Good).

I would also add that the negative impacts are not limited to the university level. Decreased funding for teachers in K-12 exacerbates a state’s ability to prosper. Here in North Carolina, we have been spiraling down the anti-education hole for the last several years, not to mention the added backward steps brought on by legislation that violates civil rights laws. It will take decades to recover from the damage already sustained.

So those are our insights for this batch of articles. What have you seen that’s worth reading for technology transfer professionals? Post a comment below or send us a private message.